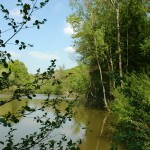 Go out of the property and walk 200 metres : on the left you find the nature park of the Domaine Marie Mouchon. A heaven of biodiversity of 22 hectares with streams, ponds and meadows at the edge of the Famenne and Condroz region. 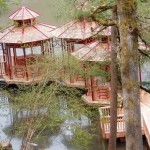 On the right, the provincial Domain of Chevetogne with its six thematic gardens scattered in a large park where activities abound for all ages and all tastes …

Do you want an unusual walk in nature?

“Sentier d’Art en Condroz-Famenne” is a new attractive and unique long-distance hiking circuit in Wallonia which covers more than 141 km in the Valley of Flavors (Ciney, Gesves, Hamois, Havelange, Ohey, Somme-Leuze) punctuated by 42 works of art in the nature. 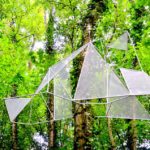 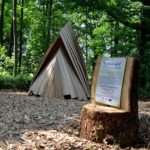 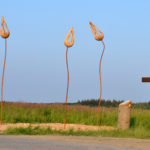 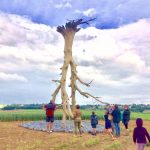 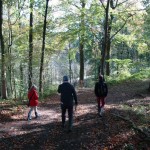 Unspoilt nature can be found everywhere, as you go out for a walk. Do not hesitate to borrow the available maps in the gîte !

In the splendid Custinne wood for example, where, at the turn of a path, you will discover the “Tomb of the Wolf”. It was at this precise spot that King Léopold I shot the last wolf in Belgium. The place exudes a certain magic which still haunts the misty valleys some clear mornings. Listen! Among the sounds rising from the coppice, you may end up hearing the ringing of a fairy bell, a witch’s laughter, the lively conversations of the elves … Are you dreaming ? No, you are in our forests !

In Conjoux, the old lime tree that “stands guard” at the crossroads to Custine is probably more than 600 years old.

One of his fellows stands in front of the entrance of the church Saint-Etienne in Waha, one of the oldest in Belgium, up on a hill dominating Marche-en-Famenne. A remarkable church where you can admire a number of stained glass windows of Jean-Michel Folon. 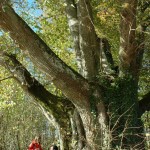 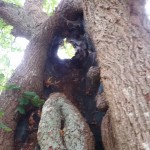 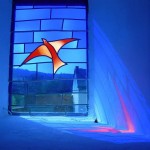 Going up the valley of the Lesse …

… you will end up in Han. Visiting the nature reserve, you will meet animals that still inhabit our regions but also those who once lived here : bears, wolves, aurochs… And of couse, you will also visit the wonderful caves carved by the Lesse in the limstone hills!
Not far from there, in the heart of the Famenne, do not miss the Museum of rural life and nature in the superb castle of Lavaux-Sainte-Anne, a treasure embedded in a lavish environment. 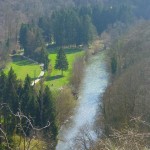 Go down the Lesse and stop in Furfooz, there is another park full of surprises. The valley of the Lesse provides its most beautiful views from the remains of the roman camp on top of the hill. From there, reaching the climbing site of Châleux or further on the Meuse, that of Freyr, will take little time. Peregrine falcons nest on the escarpments. They watch their prey on the calcareous meadows where goats and sheep sometimes graze.

From a river to another

Heading towards Hotton and Durbuy, nature will yield other secrets. Riveo, the interpretation centre of the river based in Hotton, is an excellent way of becoming familiar with the environment of the Ourthe. In  Durbuy, the nature reserve “des Enneilles” which covers more than 50 hectares, holds at least 30 species of dragonflies, numerous butterflies and even three threatened species of wild orchids.

The Ardenne opens its doors a bit further ! Saint-Hubert is at 35 kilometres. Its vast forest, a model of its kind, is a true paradise for hikers. On your way, take the time to take a tour of the open-air museum of Fourneau St-Michel, where time seems to have stopped. Bouillon, Laroche, Libramont are not far away. In Redu, the “village of books”, combine fun and the practical side by wandering in one of the 24 bookshops of the village …
You will discover another Ardenne heading towards Gedinne, riding alongside the “Botte de Givet” and going south towards the Semois. It is the Ardenne of the province of Namur, the highest point of the “Haute-Meuse” (503 metres at the Croix-Scaille). In the deep forests, beavers have taken back control of the streams. In the winter, the high plateau offers great cross-country ski tracks.